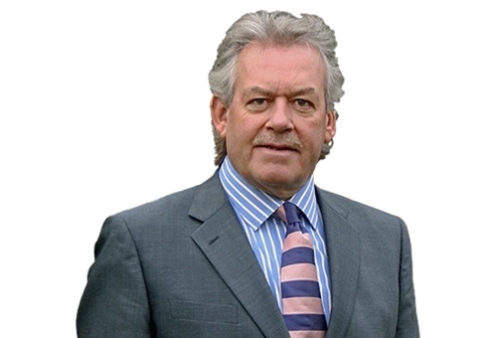 The judges not only respect him but listen to him intently. As an advocate, he is someone we all aspire to be." "The perfect jury advocate.

Patrick Harrington QC was called to the Bar (Gray’s Inn) in 1973 and took silk in 1993. He was appointed an Assistant Recorder in 1985 and a Recorder in 1991. As a junior barrister he practised from chambers in Cardiff but after a successful first year in silk was invited to join the Chambers of Lord Williams of Mostyn QC at Farrar’s Building from where Patrick has practised ever since; he took over as Head of Chambers in 2005.

Patrick has an established practice in the most serious and high profile criminal cases. He has appeared in over 250 homicide cases with an almost equal division between prosecution and defence. Although he continues to conduct homicide and other cases normally categorised as ‘general crime’, in recent years the bias of his practice has turned to financial crime. This is an area of work familiar to him but has now become a predominant part of his practice.

He is also instructed in Health & Safety cases having appeared in multiple death cases as well as cases such as R v Porter.

Over the years he has been consistently highly ranked in the Chambers & Partners and the Legal 500 directories.

R v Peter Morgan (Newport Crown Court)
Defence of multi millionaire property developer charged with the murder of his 'girlfriend', an escort for whom he had provided a lavish lifestyle.

Operation Bulkhead (2016)
Prosecuting a six month £100 million film fraud case with 4 defendants and over 50, 000 pages of served evidence. The case was described during sentencing by the Judge as "one of the most difficult and complicated cases presented at the Bar." All four were found guilty of conspiracy to cheat the public revenue and sentenced to a total of 29 years.

R v Simon Drew (2014)
Successfully represented an independent financial adviser charged with 34 counts of investment fraud to the value of £15m; led Shawn Williams throughout a 4½ month trial; Simon Drew was acquitted on all counts.

R v P (2014)
Successfully represented a solicitor charged with money laundering in a dismissal application at the Swansea Crown Court. A conjoined argument with two other solicitors led to the charges being dismissed.

R v Evans [ERIC] (2014)
Successfully represented the same solicitor in resisting an application by the SFO in the SFO's application for a Voluntary Bill of Indictment. After two weeks of argument before Fulford LJ, (sitting as a Judge of the High Court) he reserved judgment and later handed down judgement dismissing the application. The same legal team acted for Eric Evans.

R v Beadell (2014)
Represented a 22 year old man jointly charged with a drug related stabbing murder. The same defendant were also charged with firearms offences. Beadell and another were convicted of murder and sentenced to life imprisonment with a tariff of 27 years.

Operation Valgus - Part 2 (2013/2014)
Prosecution, with Ben Douglas Jones, of 7 defendants indicted in Part 2 of a massive mortgage fraud. All pleaded guilty (at earlier hearings) either as indicted or with alternative offences.

If you would like to instruct Patrick Harrington QC or would like help or advice in doing so, please call and talk to our excellent clerking team, led by Chief Executive, Alan Kilbey MBE. Our phone number is +44 (0)20 7583 9241. Alternatively, please email us at chambers@farrarsbuilding.co.uk

Patrick Harrington QC is listed as a leading silk for crime in both Chambers & Partners and the Legal 500.

“The judges not only respect him but listen to him intently. As an advocate, he is someone we all aspire to be. He has a good command of language and he is always interesting to watch. He has a very gentle delivery – the perfect jury advocate.”

A hugely experienced barrister on the Wales and Chester Circuit with significant experience in fraud and murder cases and who is highly praised by his peers.
“It is difficult to find a silk with more class or better forensic judgement.”
Recent work: Prosecuted a paranoid schizophrenic for the attempted murder of his partner’s son.
Chambers UK 2019, Crime

“He is very experienced and gets good results.” “He is diligent and well organised.”
Recent work: Acted for the first defendant in Operation Lunar, a £100 million-plus alleged tax fraud.
Chambers UK 2019, Financial Crime

Renowned for his skill in handling the prosecution and defence of high-value financial crime, including alleged tax frauds related to film finance, mortgages and carbon credits.

Strengths: “One of the best jury advocates in the UK in my opinion. Juries just love him. He plays the jury like a really good musician; he knows exactly what’s right for the jury, strips the case down to bare essentials whether prosecuting or defending a serious crime, and is very good at pretending to the jury that he’s just coming to terms with the facts of the case as the case is developing, even though you know he’s got an encyclopaedic knowledge of the case.”

Hugely experienced barrister on the Wales Circuit with significant experience in fraud and murder cases and who is highly praised by his peers.

Strengths: “He’s the top man. No one would say otherwise. He’s very good.”

Recent work: Defended one of nine defendants charged with dealing in criminal property. The case involved the theft and sale from storage sites of BT equipment worth £1 million.
Chambers UK 2017

A vastly experienced advocate who has defended and prosecuted over 200 cases of homicide and fraud in his career. He receives high praise from peers for his expert knowledge in high-profile murder cases.

Strengths: “He is a robust cross-examiner.”

‘A formidable advocate with a wealth of experience in the criminal courts.’
Legal 500

‘Sought after for his experience on the defence side of multiple death cases.’
Legal 500 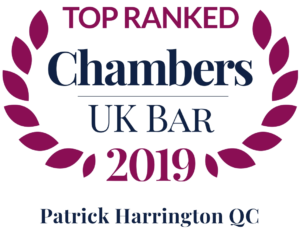 Patrick’s hobbies centre around music and sport and he has a keen interest in classic cars.