Andrew is a top-class individual who…has an excellent eye for detail & a great handle on the law." "A real craftsman who is technically excellent, precise & persuasive.

Andrew Wille has a growing caseload of complex and catastrophic personal injury and clinical negligence claims. He has a particular interest in brain injury and mental capacity, with recent cases concerning trauma-induced stroke, hypoxia at birth, diffuse axonal injury and early onset dementia.

Andrew represents families, employers and insurers in respect of claims arising out of fatal accidents. He was recently instructed by an employer in connection with the group action arising out of the terrorist attack in Algeria (In Amenas) in which several workers lost their lives and many who survived contracted post traumatic stress disorder.

Andrew is experienced in assessing claims concerning severe spinal injury, tetraplegia and paraplegia. A further area of interest is in respect of lower limb amputation and claims for the cost of bionic prosthetics.

Andrew is regularly instructed to appear in the High Court, County Courts and at inquests, as well as at joint settlement meetings and mediations. 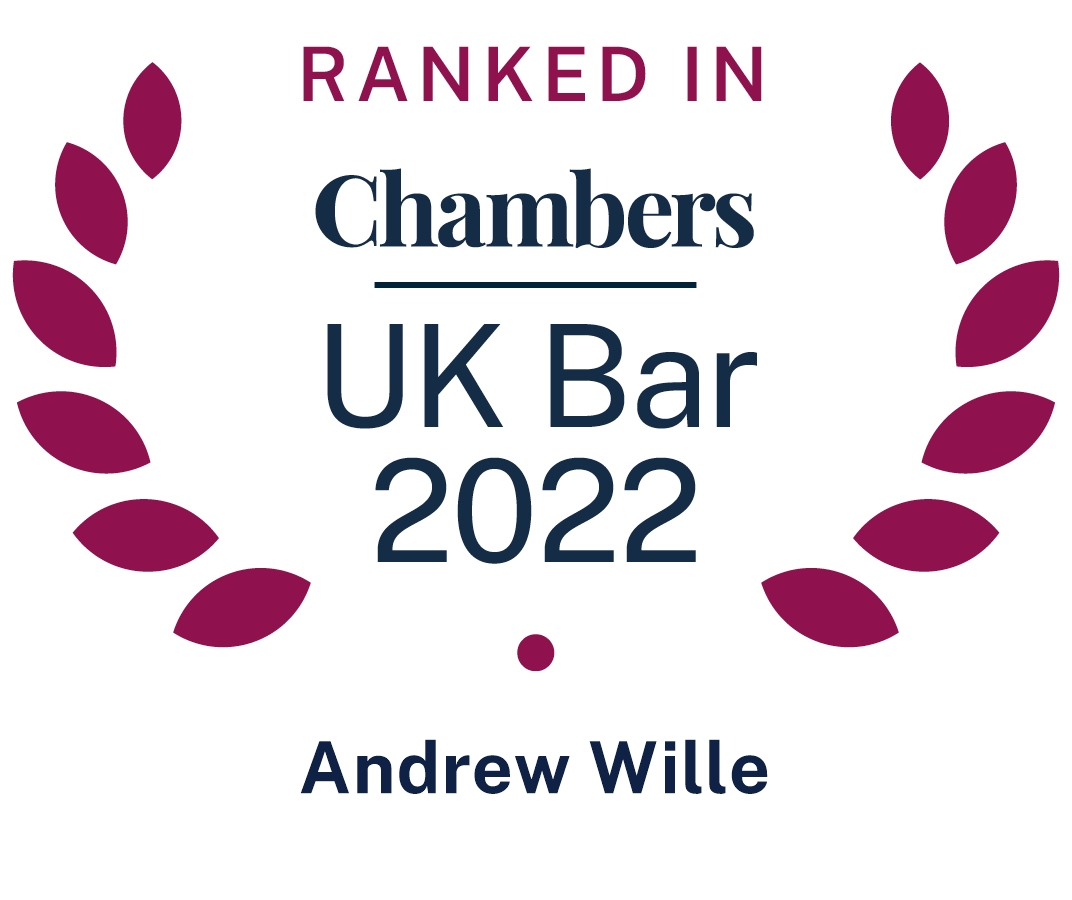 Andrew has many years experience of clinical negligence work acting for both claimants and defendants. In Singapore he formed part of the legal team (instructed by the MPS) which successfully appealed what was then the largest award in Singaporean legal history arising out of failed brain surgery. Recent claims in England & Wales have included representing a retired actuary whose consultancy career was foreshortened by negligently performed knee surgery (settled for £600,000+), a man who did not receive appropriate antibiotic prophylaxis prior to knee replacement surgery and developed an infection resulting in amputation (settled at JSM with PPO for care needs) and a woman whose brain aneurysm was missed by the hospital radiologist, resulting in delayed treatment and permanent damage to the optic nerve (successfully settled at mediation).

Andrew is instructed by both claimants and defendants to attend costs and case management conferences in respect of budgets which have ranged from £100,000 up to in excess of £1 million.

Andrew has many years experience of attending inquests up and down the country representing the interests of bereaved families, insurers and other interested parties in cases of industrial accidents and disease, road traffic accidents, police pursuit and deaths in hospital.

Andrew is experienced in advising in relation to all issues concerning disputed and/or multiple insurance cover, RTA 1988 notice provisions, Article 75 and the applicability and operation of the MIB agreements. He also represents insurers in respect of property damage claims.

He is frequently instructed to draft schedules and counter-schedules in multi-million pound claims with complex medical causation, capacity and quantum issues and is regularly instructed to attend joint settlement meetings and mediations

Other areas of expertise include the Animals Act 1971, travel law claims and chronic pain conditions.

Andrew appeared at first instance and (successfully) on appeal in Ali v Caton [2013] EWHC 1730 (QB), [2014] EWCA Civ 1313, a case in which the claimant contended that he had sustained severe brain injury but the defendant alleged gross exaggeration (pre s.57) and adduced evidence of him having successfully passed a demanding citizenship test.

He has since advised in respect of fundamental dishonesty in the context of s.57 in a number of high value cases. He also has extensive experience of advising in relation to surveillance evidence and social media evidence in the context of fundamental dishonesty, including arguments in respect of the admissibility of ‘expert’ evidence purportedly analysing surveillance footage.

J v C (2020)
A young man had been inadequately trained before being put in charge of a dumper truck in the course of excavation works. The dumper truck overturned on a ramp and the Claimant suffered a traumatic amputation of one leg and neuropathic damage to the other. Andrew acted for the Claimant. The claim included the costs of bespoke prothetics to restore a good level of function including two Genium micro-processor controlled knees, a sports prosthesis, a running prosthesis and a skiing prosthesis. The claim settled in December 2020 in the gross sum of just under £5m.

W v N (2020)
Andrew was representing the Defendant insurer in respect of this claim arising out of an RTA in which the Claimant suffered a catastrophic spinal cord injury resulting in incomplete tetraplegia. The incomplete nature of the lesion made the long-term prognosis difficult to predict. The claim, pleaded at £7m, included a substantial claim for lost earnings as a cryptocurrency trader, and a claim for the increased capital cost of wheelchair accessible accommodation. The claim settled at a JSM for £3m.

B (Deceased) v S (2020)
A fatal accident in which the Claimant was a senior barrister and part-time judge who was run down by the Defendant, driving a Porsche, who failed to stop. A claim was brought by the family including a dependency claim relating to the Claimant’s projected career earnings which utilised the expert evidence of a forensic accountant. Andrew represented the Defendant insurer.

E (Deceased) v J (Deceased) & another (2020)
The Deceased was a member of the travelling community. She was being driven by her partner in the early hours of the morning. He was under the influence of alcohol and cocaine. He left the road and both were killed. The family brought a claim which included a number of novel dependency claims including (a) the loss of income from state benefits that the Deceased received (b) the rental value of the mobile home in which she lived with her children. Andrew was representing the Defendant insurer.

S v T (2019)
Andrew was acting for the Claimant who signed up to a military-style fitness boot camp. He was encouraged by the instructor to throw a car tyre repeatedly over his head as often as he could. Shortly after the class he suffered a massive stroke. It was thought that the Claimant must have had a latent weakness in his carotid artery of which he was previously unaware. A trial on the issues of liability and causation was part-heard in Manchester in October 2019 before Recorder Jones. Judgment was subsequently entered for the Claimant with damages to be assessed.

Robson and Drake (Personal Representatives & Administrators of Miss Tamika Malo) v (1) Shofolahan (2) International Insurance Company of Hannover (2019)
Acting for the Defendant insurer in respect of a fatal accident in which the mother of a young girl was killed. The dependency claim was controversial as it included claims based upon state benefits received by the deceased and also the value of the council flat which the girl vacated following the accident. A settlement was approved by HHJ McKenna sitting as a High Court Judge.

XKR (A Protected Party) v Barts Health NHS Trust (2018)
An £18 million claim the settlement of which on a PPO basis was approved by HHJ Gargan. Andrew represented the Claimant and was led by Bill Braithwaite QC. The case involved a hypoxic birth injury leading to cerebral palsy and significant brain damage. The Claimant needed extensive care and adapted accommodation. In a contested interim payment application HHJ Curran QC awarded sufficient funds to enable the Claimant to buy suitable accommodation and start converting it for her needs before the trial. The Claimant challenged the Roberts v Johnstone methodology for calculating the accommodation claim and adduced expert evidence of mortgage interest costs. The claim settled shortly before trial with a substantial contribution made to the capital cost of accommodation.

Minton v (1) LMS (Holdings) Ltd (2) 1 Life Management Solutions Ltd (3) Ashford and St Peter’s Hospitals NHS Foundation Trust (4) St George’s University Hospitals NHS Foundation Trust (2018)
A bus driver fell whilst playing 5-a-side football and suffered catastrophic damage resulting in incomplete tetraplegia. Spinal decompression was successfully carried out in hospital but only after many hours of delay. The claim was brought against the occupiers of the 5-a-side court and also the hospitals responsible for his subsequent treatment. Complex issues of medical causation. Andrew acted for the claimant and the case was settled at the JSM .

KLM (A Protected Party) v McCarroll (2018)
Acting for the Defendant in this case involving a claimant with a brain injury who also had a personality disorder prior to the accident. The case was complex due to the need to distinguish between that which was attributable to the accident and that which was attributable to the pre-existing disorder. Capacity was also in issue. The Defendant contended that the Claimant would have lessened or prevented his injury had he worn a bike helmet and relied upon engineering and neurosurgical expert opinion to this effect. Case settled in Dec 2018 and subsequently approved.

GRS v Dunbia (Wales) (2018)
Acting for a Claimant with a learning disability attributed to pre-existing cerebral palsy, yet who managed to work in an abattoir until severely injured by a collapsing pile of crates, resulting in a hip fracture. The Claimant lost not just his employment but also the structure and support that the employment provided. He claimed for the cost of a case manager and vocational activity in the community. Settlement approved by HHJ Harrison.

If you would like to instruct Andrew Wille or would like help or advice in doing so, please call and talk to our excellent clerking team, led by Chief Executive/Director of Clerking, Paul Cray. Our phone number is +44 (0)20 7583 9241. Alternatively, please email us at chambers@farrarsbuilding.co.uk

Andrew Wille is listed as a leading junior for personal injury law in both Chambers & Partners and the Legal 500.

Andrew Wille accepts instructions from both claimants and defendants in his specialist area of life-changing brain and spinal injuries. He is also routinely involved in amputation cases, fatal accident claims and matters concerning serious accidents involving animals. He has developed notable expertise in accident at work cases. Many of his cases involve a clinical negligence aspect.

“Andrew is a top-class individual who is good to work with and acts as part of the team. He has a commercial mind.” “He has an excellent eye for detail and a great handle on the law. He is a real craftsman who is technically excellent, precise and persuasive.”

‘”Focussed attention to detail, able to deal with complex financial arrangements when assessing the value of a claim.”

“He takes a forensic approach and thinks about the detail very carefully.” “He is really bright and his attention to detail is second to none. He’s also very approachable and responsive.”

“He’s very bright and a very good advocate.” “He’s very sharp and gets to grips with issues quickly.”

Recent work: Instructed in Read v Jack, a case in which an elderly pedestrian suffered a severe brain injury after bring run down by a motorist.
Chambers UK 2019

Accepts instructions from both claimants and defendants in his specialist area of life-changing brain and spinal injuries. He is also routinely involved in amputation cases and matters concerning serious accidents involving animals.

Recent work: Acted for the claimant in Spencer v Terry. The claimant had been thrown off her horse after being chased by the defendant’s dog.
Chambers UK 2017

Noted for his expert handling of catastrophic brain injury claims. He also has significant expertise on both Animals Act litigation and inquests after fatal accidents.

Strengths: “He is bright, thoughtful and a natural advocate.” “He is personable and is quick to get to grips with a really complex case.”

Recent work: Acted for the claimant in Davies v Wright, where an RTA left a man with significant neurotrauma and led to a claim for £2.4 million.
Chambers UK 2016

“He has an extraordinary eye for detail while not losing sight of the big picture.”
Legal 500

In his spare time Andrew promises to mow the lawn. He enjoys visiting vineyards, studying architecture and listening to Test Match Special.